The first day of Paris Fashion Week is a glimpse into the future: when acid washes make a comeback, rippling fringes are in, clothing should be reflective or metallic, and holographic discs float everywhere. These trends might be tacky and trashy, but in the hands of Vaquera, everything turns into a subversive and chic fantasy.

Patric DiCaprio and Bryn Taubensee are the masterminds behind one of New York’s coolest underrated labels. Since 2013, they’ve been creating fashion fanfiction by capturing their obsessions to create iconic pieces like the Tiffany & Co heart cushion dress and life-size clutch. Backed by Dover Street Market for Spring/Summer 2023, they’ve brought their aesthetic camp in Paris for the second time. In this presentation, Vaquera merges the current American era – post-Trump, post-quarantine, law regression, “financial recession” – with French haute couture, from flags flown from the south shore of Long Island to sailor hats which pay homage to Jean Paul Gaultier. One standout look is DiCaprio’s mother’s wedding dress, which is ripped, displaying a baby pink lace bodysuit under denim shorts. An oversized bow is tied around the model’s head to match the exaggerated ruffles at the shoulders. It’s a functional take on Vaquera’s usual doll dresses, inviting others to bring a weird taste to their everyday clothes.

Apart from Vaquera’s unparalleled designs, another brand signature is their model walk. (Actually, it’s more like a race.) The dummies race down the track in nanoseconds, demanding special attention. They are not smiling, but rather have sullen expressions, faces filled with anguish. They’re edgy outcasts with heavy metal hearts, and their leader is Born. 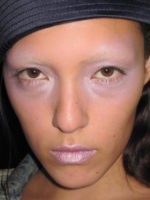 Born is the quintessential Vaquera muse, wearing a starry bodysuit this season. She’s one of those girls who can rock any look, from Vaqeura Princess to Instagram Baddie. Model Kollektiv and Linden Staub began her career in 2018. Soon after, she met DiCaprio and Taubensee, who describe her as representing everything Vaquera stands for in fashion: “whimsical, fun, challenging the status quo, creating characters”.

For Document, Born shares her experience as the muse behind the brand making Fashion Week fun again.

Madison Bulnes: How did you find yourself in modeling?

Born: I was working in a pizzeria in Pennsylvania and I couldn’t take it anymore. I knew I had to move to New York or I was going to rot. I had no plan at all. I only knew two people in the whole town. I feel like Cinderella now, going from selling pizza to opening a show during Paris Fashion Week.

Madison: How did you meet Patric DiCaprio and Bryn Taubensee?

Born: I was cast by Midland [Agency] for the Fall/Winter 2020 show via Instagram. I was happy for me, all my selfies and the hundreds I archived.

Madison: What is your best memory with the pair?

Born: I can’t name the moment we all clicked. But very early on, when I started becoming the fit model, they started complimenting what I was wearing. We have inspired each other. For me, there is no greater praise than finding yourself inspiring.

Madison: How did you go from friend, to model, to muse?

Born: [Actually], our relationship has gone from model, to muse, to friend. My first show with the brand was also my very first show. I couldn’t even tell who the designers were because there was so much behind the scenes. Months later, I sat in a makeup chair and was dubbed “the girl who saved the Vaquera show.” I wasn’t sure if I was doing the look justice, let alone saving the show. I was never considered a model again, only a muse after this season.

Madison: What was your first impression of Vaquera’s designs, and how have you seen them evolve over the years?

Born: If I had to bet on a racehorse, it’s Vaquera. The creativity and spirit of this team are still relevant today. It’s new and exciting in an inclusive way. Maybe you’ve seen your neighbor wearing a vintage sweater like this. Vaquera takes those hints of nostalgia and cranks up the volume until your neighbor’s sweater is coffee-stained, shrunk in the wash, turned inside out, and bleached.

Madison: In your shoots and in real life, you often change your style. What is your favorite type of character?

Born: I can handle great looks; I don’t let clothes wear me down. One of my greatest qualities is confidence. We all have those moments when we look at pictures and ask ourselves, “What was I thinking? But in my case, it’s full ghost hunters cosplay secretary or goth vampire on vacation. For this trip to Paris, I only packed ties, dress shirts, fake glasses, and blazers because I’m dedicated to the complete moment. 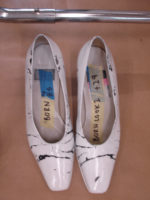 Madison: How is it to be on a Vaquera set, compared to the other sets you’ve worked on?

Born: There is an established trust that comes with walking on a Vaquera board. I don’t have to calculate if I’m too much; I automatically know the character. On each set, I enter like a ball of sunshine, as long as it is after 8 am!

Madison: When taking these behind-the-scenes photos, what were you focused on?

Born: I’m not numb to show my nerves, despite the number of times I walked. Taking pictures helps me remember to slow down and savor. I can look around and see what everyone is doing. I love butterflies, they help me walk. Instead of just stomping the sidewalk, it’s like crushing flowers barefoot. There is a soft aspect to a strong march.