There’s a lot of gear and accessories I’ve reviewed during my time at Gaming Trend, but I don’t think I ever assumed prescription lenses would be among them. I wear glasses, and while I’m not completely dependent on them to see, it does make things nice and crisp, allowing me the most freedom to play a game and enjoy it. One of the obvious detractors of VR is that something is attached to your face, and while companies have done their best to mitigate any discomfort, whether through gear or design, it never seems perfect. However, when we discovered VR-Rock’s solution, prescription lenses that attach to your glasses on VR headsets, we had to try them out and in the process found a hidden gem that will allow more people to enjoy virtual reality.

When you open your package, you will find everything in a pretty little carrying case. This was a wonderful touch in my opinion, as lenses are often misplaced or easily scratched. Having a place to secure them when not in use is fantastic and shows the “forward thinking” of VR-Rock. On top of that you have a blue light to test against your lenses, as well as a map that lets you see via a test strip how much blue light is leaking through the lenses when held up front. It’s the little things, but they let you know that a company stands behind its products.

And then of course we have your corrective lenses! These are a weird shape, and that’s because you’ll be attaching them directly to your Meta/Oculus Quest 2 lenses. One thing I would have appreciated with the packaging would have been an inset on how to attach the lens to prescription at the Quest; not because it’s necessarily that hard, but without any prior knowledge of what to do, it certainly took a while to figure out what was going on with them. The VR-Rock lenses are also designed in a special way which I love; they are in two parts, a plastic connector to the Meta/Oculus Quest 2 and the lens. These attach via three magnets on the outside and work great. The good news is that they don’t move at all once connected, allowing for clean play while being easy to remove afterwards. This design also allows you to remove them for players without a prescription or replace them with a different prescription. My only concern would be mixing up your lenses if you have multiple wearers in the house, so maybe some way to mark them would be good.

Once attached, it’s time to play around with the Meta/Oculus Quest, and boy, is it fantastic with these in place. Like I said, wearing glasses with these can be uncomfortable, and half the time I play without them. With the VR-Rock prescription lenses attached, all that annoyance goes away and I feel like I’m playing with the device as it was intended. There’s no more need to add the glasses spacer or worry about new glasses not fitting properly. It’s perfect for me, crystal clear, giving me crisp visuals that I’ve only been able to experience with glasses. I also haven’t noticed any fogging or smudging with the lenses, and while that may happen over time, it certainly doesn’t with the amount of time I use them. In the end, because it relieves my glasses without adding eye strain, I can play longer and more often with my Meta/Oculus Quest 2, not to mention that I want to.

One of the only things I noticed in terms of comfort happened when I added a battery strap to my Meta/Oculus Quest 2 this week. I guess where the device rests on my head changed a bit when it was added, and for the better, but I had a moment where I could feel the lenses pushing against the bridge of my nose. It wasn’t great, but after a little tweaking it went away. This won’t be the case for everyone, but it’s something to think about.

As for picking them up, the VR-Rock website is not only easy to navigate, but has a ton of options for different prescriptions, different devices, and of course extras. As of now, VR-Rock supports most major VR headsets, like Meta/Oculus, as well as PSVR, Valve Index, Pimax headsets (which we recently reviewed), and more. Once you choose your device, you will be presented with your options for entering your prescription, and the price is really going to come down to the intensity of your prescription. 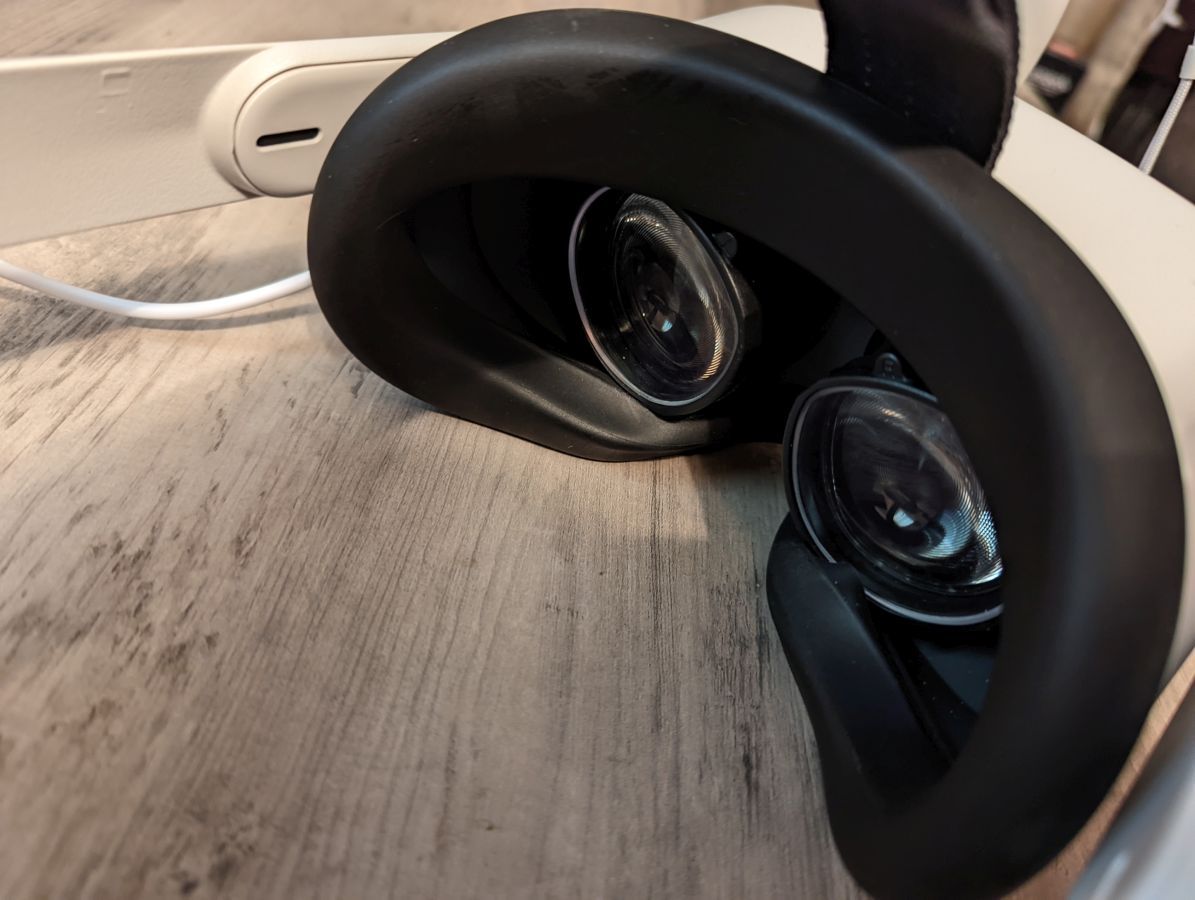 If you just want the basics and don’t have too large a prescription to fill, it can be as low as $58, which is my case. That said, it’s worth spending a bit more on blue light and glare filters, because with the strain VR can put on your eyes, any protection is worth it. It’s only $10 more per piece, so well worth it. Price will always be the question for things like this that aren’t necessary, but in my opinion the convenience of never having to use my glasses with my VR makes these lenses so worth it, especially plus that there’s no wealth of accessories you’ll have to buy for most helmets, and if you’re spending the money on the higher end ones, that’s a drop in the bucket .

VR-Rock Prescription VR lenses are available now, and with many options for many different VR devices. You can buy them through their site herewith a 5% discount on our code GAMINGTREND.

VR-Rock Prescription VR Lenses are a must-have for anyone who can’t play VR without glasses or suffers from eye strain without them. I literally want to play more with my Meta/Oculus Quest 2 now that I have them, and they allow me to play longer with both the clarity of the lenses and the comfort they provide. Sure, it’s a bit pricey, but it’s not too expensive for the satisfaction you get from playing VR without additional glasses.

David Burdette is a TN gamer/writer/content creator and editor of Gaming Trend. He loves Playstation, Star Wars, Marvel and many other fandoms. He also plays way too much Call Of Duty. You can chat with him on Twitter @SplitEnd89.