A Ukrainian refugee from the Mariupol region cries after arriving at a registration center for displaced people in Zaporizhzhia. /Ueslei Marcelino/Reuters

A Ukrainian refugee from the Mariupol region cries after arriving at a registration center for displaced people in Zaporizhzhia. /Ueslei Marcelino/Reuters

• A group of around 100 civilians were evacuated from the besieged Azovstal steelworks, the last stronghold of Ukrainian soldiers in Mariupol. Moscow says some civilians were handed over to the Red Cross and the UN, which confirmed the operation. Ukrainian authorities began evacuating more civilians from the city on Monday.

• US House Speaker Nancy Pelosi urged Ukraine not to back down in the face of ‘bullies’ like Russia after a surprise weekend visit to Kyiv. “Don’t be intimidated by bullies. If they make threats, you can’t back down. That’s my view,” she told reporters in Poland after talks with President Zelenskyy in the Ukrainian capital.

• EU wants to phase out Russian oil imports under new round of sanctions against Moscow for its actions in Ukraine, according to sources in the bloc. The European Commission is currently preparing the text, which could be submitted to member states as early as Wednesday, according to diplomats, but Hungary and Slovakia can be exempted from the embargo.

• Daily demands for Russian gas deliveries via Ukraine to Europe via Slovakia hit their highest since late November, according to Slovak data. Russia cut off gas supplies to Poland and Bulgaria last week over their refusal to pay in roubles, although Poland continues to get Russian gas from Germany through the Yamal-Europe pipeline.

• Eight civilians died following Russian bombardments in Donetsk and Kharkiv, according to regional governors, as Moscow’s forces push deeper into eastern Ukraine. Lyman, a known former railroad hub, is expected to be the next town to fall after the withdrawal of Ukrainian forces.

• Russian Foreign Minister Sergei Lavrov said Moscow only wanted to guarantee the safety of pro-Russian Ukrainians in the east and would not demand that Zelensky “surrender”. “We demand that he give the order to release the civilians and stop the resistance. Our goal does not include regime change in Ukraine,” Lavrov said.

• However, Israel on Monday denounced Lavrov for implying that Nazi leader Adolf Hitler had Jewish roots, demanding an apology from Moscow. Speaking to Italian broadcaster Rete 4, Lavrov was asked how Russia could say it should “denazify” Ukraine when the country’s president is Jewish. He replied, “When they say ‘What kind of Nazification is it if we’re Jews’, well I think Hitler had Jewish backgrounds too, so that doesn’t mean anything.” Israel’s foreign minister said it was “an outrageous and unforgivable statement, a terrible historical mistake, and we expect an apology.”

• Moscow has hinted it could seize Russian-based assets from countries it considers hostile in retaliation for a US proposal to sell the assets of Russian oligarchs and give the proceeds to Ukraine.

• Denmark to reopen its embassy in Ukraine Monday, the Danish Foreign Ministry announced. “It is a very strong symbol of Danish support for Ukraine and the Ukrainian people that today we are reopening the doors of the Danish embassy,” he told Danish television channel DR.

• A fire broke out at a Russian Defense Ministry site in Belgorod, near the Ukrainian border, specifies the governor of the region. One person was injured. Governor Vyacheslav Gladkov said he “wanted to allay fears among the locals that someone or something came from Ukrainian territory.”

• Spanish tennis star Rafael Nadal has denounced Wimbledon’s decision to ban Russian and Belarusian players from playing at the Championships, saying it was “unfair” because the conflict is not their fault.

• More than 5.5 million people have fled Ukraine since the start of the conflict on February 24, the UN Refugee Agency reported on Monday. 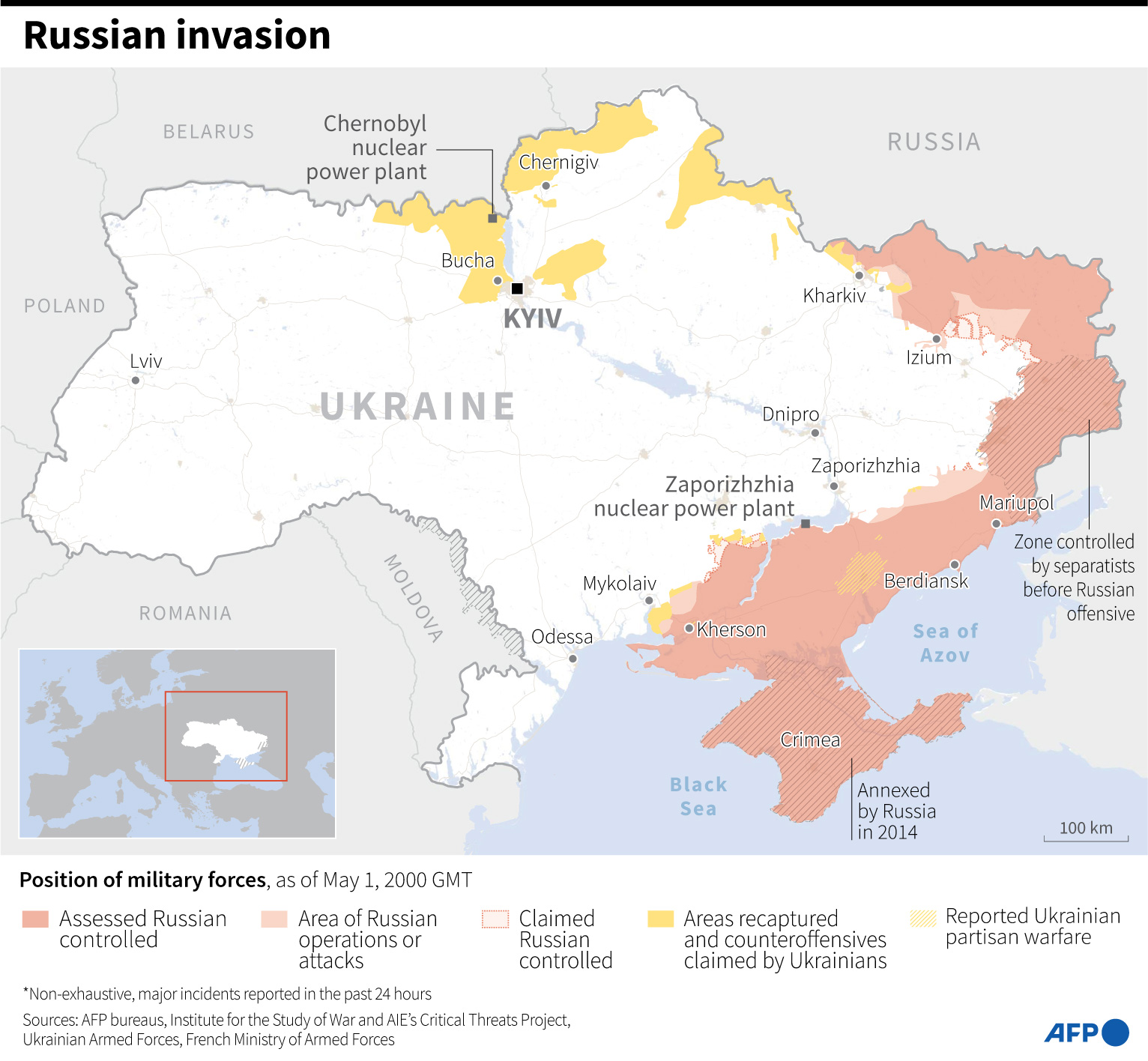 Aid organizations are working to evacuate more civilians from the devastated Ukrainian port city of Mariupol, and hundreds of people are believed to still be trapped in the Azovstal steelworks, the last stronghold of Ukrainian troops in the city.

A group of around 100 civilians was evacuated from the factory complex on Sunday and were due to arrive Monday morning in the Ukrainian town of Zaporizhzhia, 230 km northwest of Mariupol.

“For the first time we had two days of ceasefire in this territory and we managed to eliminate more than 100 civilians – women, children,” President Volodymyr Zelenskyy said in an overnight video address.

Those still stuck there lacked water, food and medicine as Russian forces locked them in the industrial complex, whose network of bunkers and tunnels provided shelter after weeks of Russian bombardment. 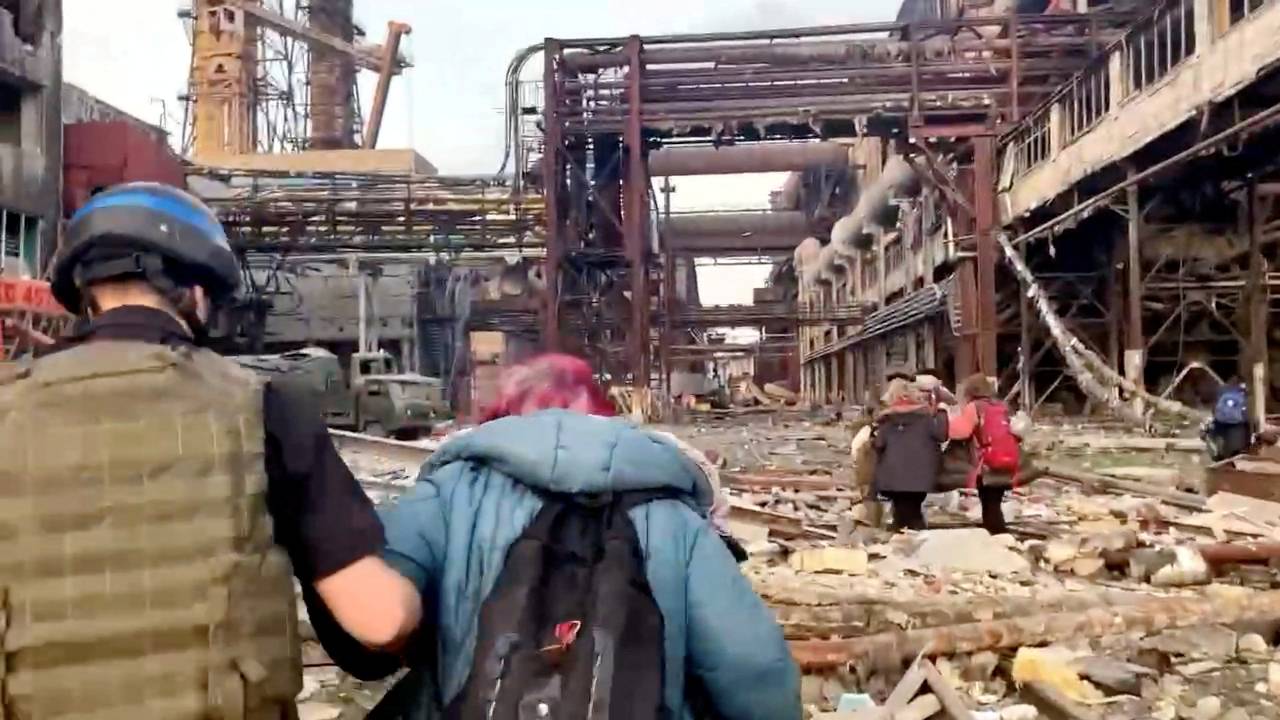 An evacuee accompanied by young children said survivors were quickly running out of food.

“Kids have always wanted to eat. You know, adults can wait,” she said.

Footage from inside the steelworks shows members of the Azov Regiment helping civilians through rubble and onto a bus, but hundreds of other civilians remain trapped inside.

China in the 1980s: in photographs

Last week, Russia said it had decided not to storm the steelworks and would blockade it instead. But the sporadic shelling continued.

According to a city official, Russian forces resumed shelling the steelworks as soon as the buses left the plant.

However, other buses were set up to transport civilians from Mariupol on Monday morning, but so far the convoy has not taken people from the besieged steelworks. 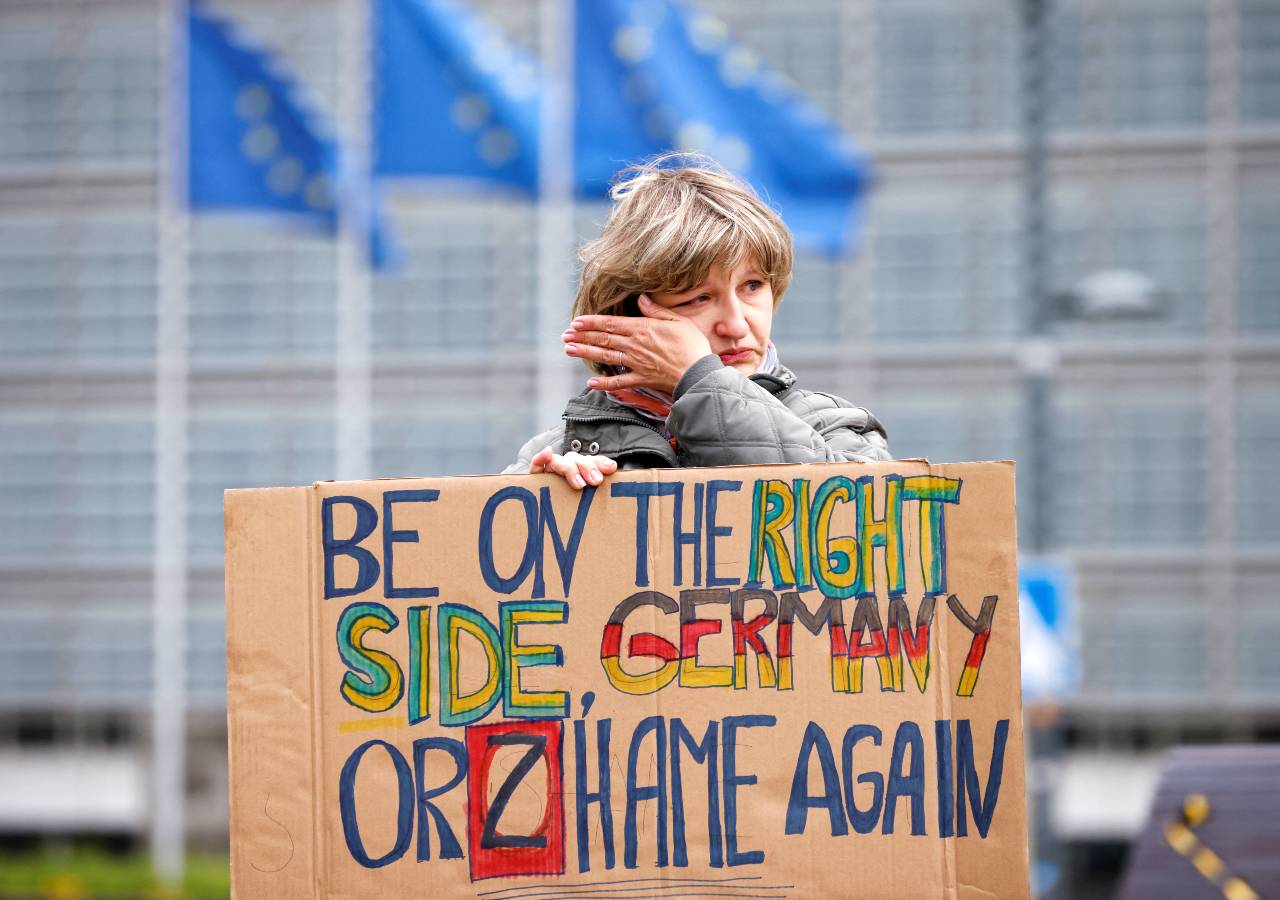 A climate activist holds a placard outside the European Council in Brussels calling for an immediate embargo on Russian fuel. /Johanna Geron.Reuters

A climate activist holds a placard outside the European Council in Brussels calling for an immediate embargo on Russian fuel. /Johanna Geron.Reuters

Internationally, EU energy ministers are due to hold urgent talks over Moscow’s demand that European buyers pay for Russian gas in rubles or face having their supply cut off.

While the EU has imposed heavy economic sanctions on Russia in response to its actions in Ukraine, the issue of Russian energy supplies remains a dilemma that threatens to split the bloc’s united front.

Meeting In Brussels, EU energy ministers were expected to find a way out of the dilemma posed by Russian energy supplies, which account for 40% of the bloc’s gas and 26% of its oil imports.

Germany has led calls to resist an immediate ban on Russian fuel imports for fear of economic damage, while Moscow is demanding that European buyers pay for Russian gas in rubles or risk having their supply cut off.

Russia cut off gas supplies to Bulgaria and Poland last week after refusing to meet such demand.

With many European companies facing gas payment delays later this month, EU states must decide whether companies can continue to buy without breaching EU sanctions against Russia.

Ruble payments would help shield Russia’s economy from the impact of sanctions, with EU diplomats saying the EU is moving towards a ban on Russian oil imports by the end of the year.

German Economy Minister Robert Habeck said on Monday that some countries were not yet ready for an embargo on Russian oil. Germany did not want to trigger an economic catastrophe, he said.