In a recent study published in the journal Nature Communicationresearchers have developed a wireless theranostic contact lens sensor (WTCL) to detect intraocular pressure (IOP) on the spot and on-demand delivery of anti-glaucoma medication.

Glaucoma can cause irreversible vision loss, with elevated IOP due to abnormal circulation in the aqueous humor of the eye. Therefore, continuous, long-term monitoring of IOP is necessary to identify fluctuations in IOP leading to ocular damage.

Current IOP measuring devices such as tonometers require trained clinicians and may not identify critical fluctuations in IOP. Existing anti-glaucoma drug delivery methods, such as eye drops, rely on topical routes to lower IOP. However, these routes have been difficult due to low bioavailability, side effects, and poor compliance. High-risk conditions such as acute angle-closure glaucoma that occur due to sudden elevation of IOP (IOP > 21 mmHg), usually present with nausea and headache that interfere with self-administration medications by patients.

Manufacture of the WTCL sensor

The sensor uses the sensing module with the inductor-capacitor-resistor (LCR) circuit for IOP sensing and the multiple delivery modules with the wireless power transfer (WPT) circuit for drug delivery.

The sensor includes a soft lens that can conformally interface with the ocular cornea and can effectively deform to transduce corneal limbus expansion to the CSF circuit upon IOP elevation and could locally exert external stimuli ( chemical or electrical) on the cornea. The lens has a dual layer structure which provides compactness and facilitates the incorporation of multiple electrical drug delivery modules and the LCR circuitry into the limited, curved space of the contact lens. The linear range of the sensor is >5 to 50 mmHg, indicating the extent of IOP monitoring. 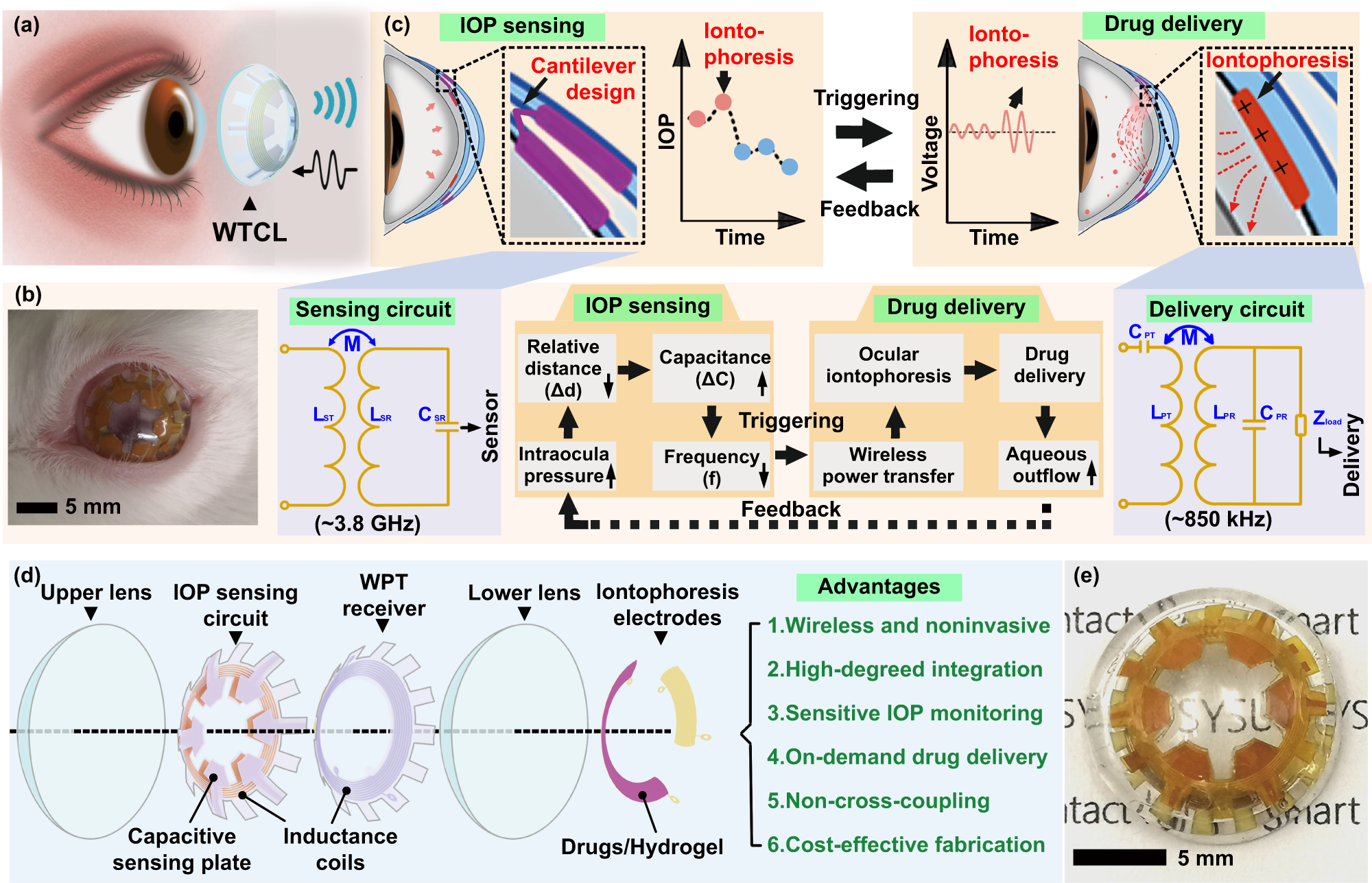 a Schematic of the WTCL for wireless IOP monitoring and administration. b Photograph of the WTCL worn on the eyes of a live rabbit. vs Wireless operating scheme for IOP monitoring and on-demand medication delivery in a minimally invasive manner. The soft device, designed as a dual-layer contact lens structure, was integrated with an LCR and WPT receiver circuit. These modules were wirelessly connected to an external built-in antenna that could record the PIO signal and trigger iontophoresis for drug delivery if needed. The insert figures highlight the critical IOP sensing and drug delivery unit respectively. D WTCL structure in exploded view. and Optical image of the WTCL.

The dielectric air film sandwiched between the contact lens layers was combined with the LCR circuit in a cantilever configuration, forming the transducer to detect IOP fluctuations and wirelessly transmit them producing signals at the resonant frequency. The ultra-softness (zero viscoelasticity and ultra-low modulus of elasticity) of the sandwiched air film facilitates the ultrasensitive detection of IOP by the WTCL sensor.

The LCR circuit has a snowflake-shaped design, in which the capacitive sensing plates (a total of six plates) and the reference plates are bent into a cantilever structure. The design increases the sensitivity, repeatability and reliability of the WTCL sensor. 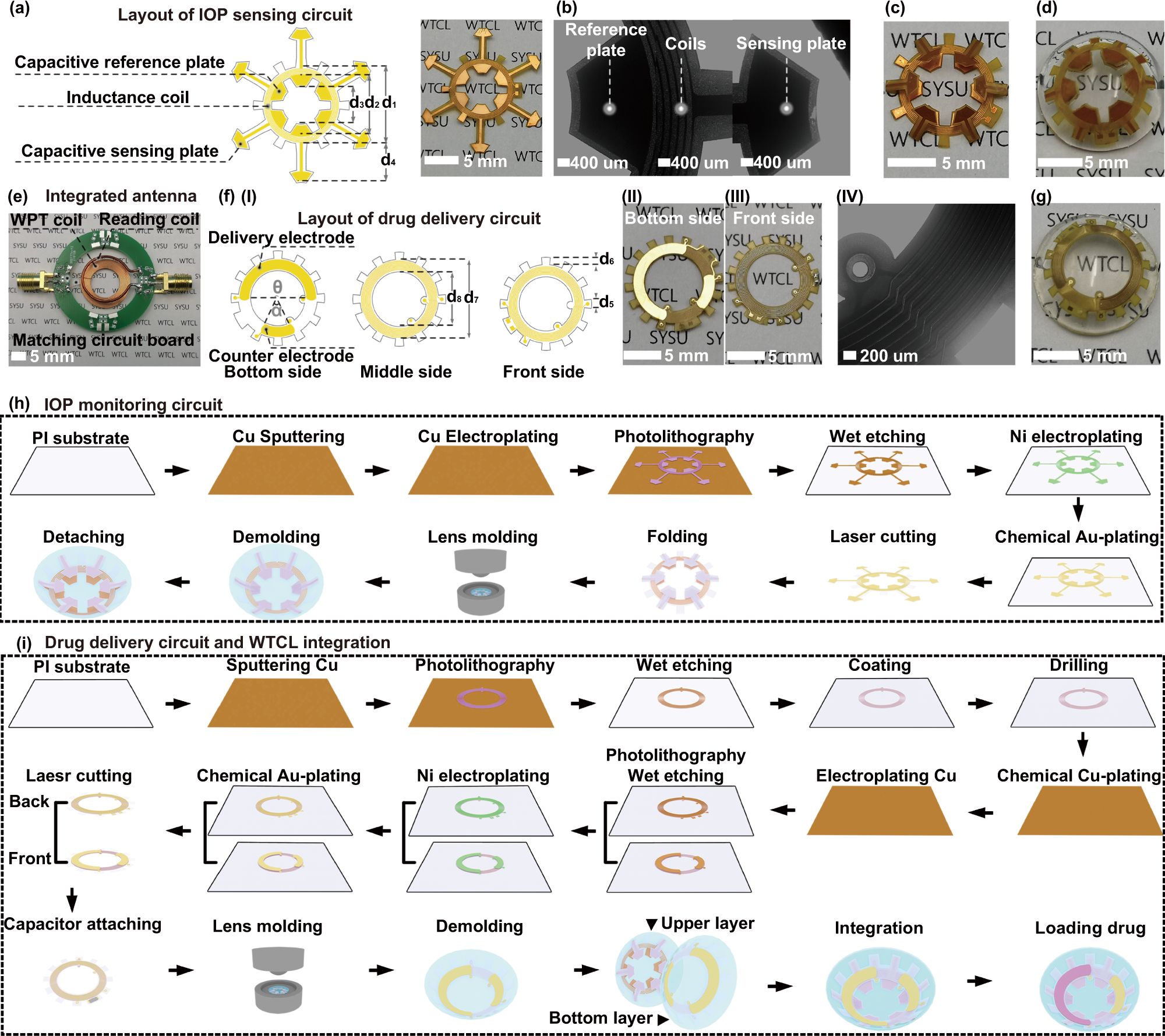 The deformation of the corneal curvature that occurs during IOP elevation compresses the thickness of the air film, causing an increase in capacitance (CSR) and a decrease in LCR resonant frequency that can be recorded without wire using the sensor’s built-in antenna read coils.

The WPT circuit allows on the spot drug delivery and migration of anti-glaucoma drugs into the aqueous chamber by iontophoresis. The WPT circuit has a flower-shaped design that provides effective mechanical interlocking of the WPT circuit with the bottom lens layer.

The detection module comprises copper (100 µm) coated with nickel/aluminum. The delivery module includes the same substances patterned into coils to form the WPT receiver with an additional layer of copper connected to the coils through holes. Capacitors are soldered on the circuit to adjust the WPT frequency. The lower lens delivery electrode is coated with a thin layer of drug-loaded hydrogel and assembled with the upper lens to form the WTCL sensor.

The drug delivery performance of the WTCL sensor has been tested ex-vivo casting a UVB-irradiated brimonidine-loaded hydrogel layer into pig eyes by iontophoresis. During wireless power transmission, the WPT receiver generated alternating voltages, which caused the electrical migration of the positively charged drug brimonidine into the aqueous chamber of pig eyes. The results showed that the WTCL sensor could be used for on-demand electrical and ocular drug delivery.

The in vivo performance of the WTCL sensor was evaluated using rabbit eyes in which the sensor was incorporated, and the IOP measured by the sensor was compared with that of Tonopen (tonometer). Additionally, brimonidine was delivered by sensor and eye drops and the results were compared. The results confirmed that the sensor could be used to rapidly reduce IOP with prolonged effects, which is desirable for IOP regulation.

Overall, the study results showed that the WTCL sensor was a wireless, minimally invasive, sensitive, reliable, flexible, compact, lightweight, and reusable device for on the spot IOP monitoring and effective, on-demand delivery of eye medications. Additionally, the sensor’s manufacturing is compatible with the standard manufacturing process, highlighting its potential for large-scale use.