The Fresno Unified School Board next week will consider awarding a $47.8 million construction contract and project work agreement to build the new Francine and Murray Farber Educational Campus in southeast Fresno.

Similar to the Herrera Project Labor Agreement, the Farber PLA will include intern and pre-apprentice employment opportunities for students in the district.

Five bids to build the Farber campus at 10th Street and Ventura Avenue were submitted to the district, three of which were rejected because they were deemed “non-compliant” because they included a subcontractor for site utilities that was not pre-qualified as required in the tender documents.

The lowest and apparently winning bidder is Davis Moreno Construction Inc. of Fresno, which also won the tender to build Herrera Elementary.

Davis Moreno’s history with the district has been controversial. The company’s CEO is suing Fresno Unified over past construction projects that were classified as “lease-lease” and awarded to competitor Harris Construction Inc. Steven Davis’ lawsuit challenges untendered contract from district with Harris to build Rutherford Gaston Middle School violated California auction laws, the state education code and conflict of interest laws.

The lawsuit is still pending in the California Supreme Court.

The total cost of the Farber campus is now estimated at $65.3 million and includes the construction contract, design work, furnishings and equipment, and other costs, the director of the campus said Friday. exploitation, Karin Temple, to GV Wire.

“The construction bid award recommendation ($47.847 million) is very close to the construction-only estimate,” she said in an email.

The 12.8-acre Farber Campus is scheduled to open in August 2024 and will be the new home for students currently attending alternative education programs at Cambridge Continuation High School, JE Young Academic Center and eLearn Center. Students will have the options of dual enrollment (college level courses offered in high schools) and several vocational technical education program pathways. For the first time, Cambridge and JE Young students will have access to an on-site school library.

The campus will also include a student union where students and others can eat meals, and spaces will be available for community meetings for parent groups and others.

Additionally, the site will provide office space for district departments, including Special Education and the Prevention and Response Department.

The public session of the school board meeting is scheduled to begin at 5:45 p.m. Wednesday and will be held at the district’s downtown headquarters at M and Tulare streets. 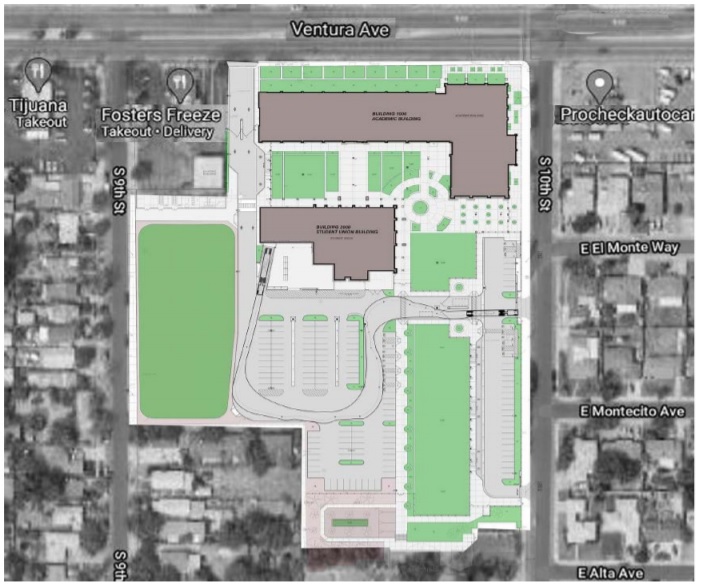