DZOFilm announced the Marlin 1.6x expander which adapts Super35 lenses to larger sensors. It not only promises to extend the effective focal length of these lenses, but also the image circle itself.

The DZOFilm Marlin 1.6x can convert Super35 to cover both full frame and Vista Vision cameras like the ARRI ALEXA LF/ Mini LF, Sony VENICE 1 and 2 and RED V-RAPTOR.

Built with what DZOFilm says are high-resolution optics, the Marlin 1.6x Extender also enlarges the image circle and focal length without changing the field of view, adding vignette, or causing appreciable image quality degradation. image. The light loss, however, is about 1.5 stops.

The extender has a removable stand base and stainless steel stand and weighs just under 25 ounces (seven kilograms) and the entire device is 109mm long. DXOFilm says the design also uses unique mounting rings, so there’s no need for shims or mounting replacements to fit the extender. 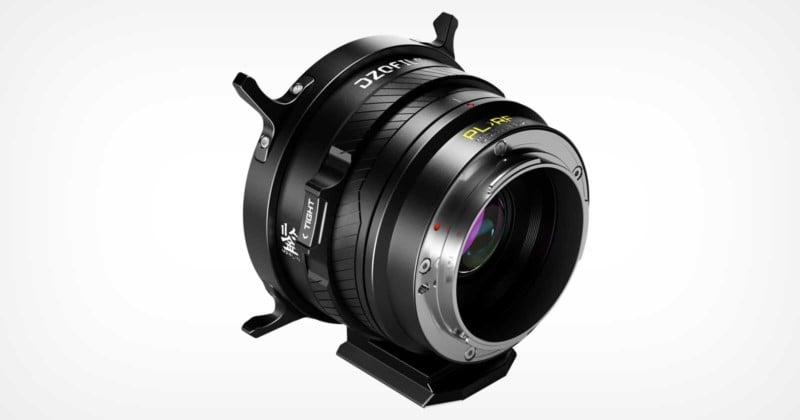 The distance between the rim plane of a PL-mount lens, for example, and the rear is less than 19.64mm. DZOFilm also offers an Adapter Clearance Checker Tool, which can be downloaded from the DZO Film websiteto calibrate the back focus and check the compatibility of other lenses outside of the Pictor Zoom series, for which the expander is optimized. The company has created a series of videos describing the procedure after printing and preparing the tuning tool. Users simply scan the QR code, which will direct them to the page who has the tutorials. There are three tutorials that cover DZOFilm’s range of lenses, including Pictor Zoom, Cata Zoom and LingLung, but the company implies that the principles can also be used on third-party lenses.

Users can also print out the PL Mount Clearance Check Template to verify that there is enough clearance to add the required lens extension adapter. Simply cut out the mounting template, then transfer it to cardboard or another sturdier material before checking the fit.

The price of the DZOFilm Marlin 1.6x extender varies by mount, but the base price is $1159 with versions covering PL-E, PL-RF and PL-L. There is also a PL-LPL and PL-PL version for $1699. Shipping is scheduled for early July.