Canon has partnered with an Australian university to bring together 10 Canon EF 400mm f/2.8L IS II lenses together in what they call the Huntsman Telescope to explore the sky from the southern hemisphere.

The new telescope design, made by Macquarie University with support from Canon, will be used to search for and study ultra-faint galaxies and astronomical objects from Australia.

The Huntsman Telescope is inspired by the enormous Dragonfly Telephoto Array which consists of 24 Canon 400mm telephoto lenses and is based in the United States. 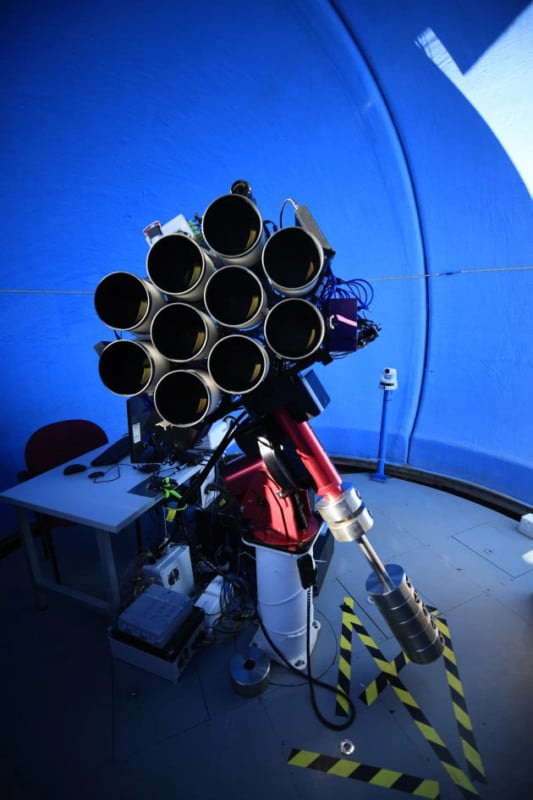 The second-generation 400mm was chosen because of its ‘superb’ anti-reflective properties thanks to the lens featuring Canon’s nano-engineered coatings, reports australian photography. The coated lens array contrasts with a conventional mirror telescope, whose imperfectly polished surface can introduce subtle errors that ruin the extensive and faint structures surrounding galaxies.

Additionally, each lens in the array is equipped with a single monolithic wide-field detector covering six square degrees. With multiple redundant lines of sight, the Huntsman is capable of extremely accurate emission modeling of the night sky and producing ultra-clear renderings of the universe.

Located at the Siding Spring Observatory near Coonabarabran, New South Wales, the Huntsman Telescope will survey the southern deep sky to provide researchers with a unique understanding of galaxy formation and evolution; how galaxies form, how they grow, how they interact with structures around them, and what happens when galaxies collide.

The work of the Huntsman Telescope will be crucial in understanding what could happen if the Milky Way galaxy were to collide head-on with its neighbor, the Andromeda galaxy, an event believed to occur 4.5 billion years from now.

“The Huntsman Telescope is a pioneer in how we see our southern skies by capturing images of the faintest galaxy structures that conventional telescopes simply couldn’t,” says Huntsman Telescope Principal Investigator Dr. Lee Spitler. .

“The ability to observe remnants of galaxies colliding with each other and to search for the faintest and smallest galaxies in the universe will help us understand the potential fate of the Milky Way in the distant future. “